Kenzie Smith was born and raised in Portland, Oregon. Although his career is centered around performing music, Kenzie attended college and earned a degree in Business Administration and Japanese. He currently resides near Oregon City, Oregon with his wife.

During his early life, Kenzie was introduced to the piano at the age of twelve when he was gifted a small digital piano on Christmas morning. He soon began to take piano lessons from a family friend with his two older brothers.

Over the course of two years, Kenzie eventually stopped taking piano lessons and soon lost interest in playing the piano along with his two older brothers. It wasn’t until he heard on the radio a fantastic piece arranged for piano solo that Kenzie then had an unwavering desire to learn the piano once again. It was then that Kenzie began to teach himself how to play some of the pieces that inspired him to play the piano again.

Immediately following weekly church activities held during the week, Kenzie would often be found playing the beautiful grand piano located in the chapel of the church building. By a careful listener, the sound of the piano could be heard playing throughout the entire building. One week in particular, the music caught the attention of the local Bishop who happened to overhear Canon in D playing from the chapel. It was at this time when Kenzie was asked to provide the music for Sunday services every week. Not being very experienced in sight reading, let alone playing the piano in general, Kenzie agreed to provide music for Sunday meetings. To this day, Kenzie continues to provide the music for church services every Sunday playing both the piano as well as the pipe organ.

During his time in college, Kenzie recorded himself playing Ichiban no Takaramono (from “Angel Beats!”) on the piano an uploaded the video on YouTube. Not realizing it at the time, this is when his music career began. He grew a small fanbase on YouTube and continued to upload various arrangements of songs from different anime and visual novels.

About one year of continual uploading to YouTube, Kenzie began publishing albums to most music platforms including Spotify, Apple Music, etc. (first being “Anime Music Collection Piano Solo, Vol.1” published in 2015). As of now, Kenzie continues to publish new albums primarily of his anime renditions, but also on occasion arranges songs from Disney movies and video games.

Kenzie’s work is often featured in fans’ YouTube videos and other projects. One of Kenzie’s most popular tracks, “Guilty Crown – Krone” was featured in the 2017 Music on Ice with the performance of Daisuke Takahashi, an Olympic figure skating medalist and a five-time Japanese national champion. 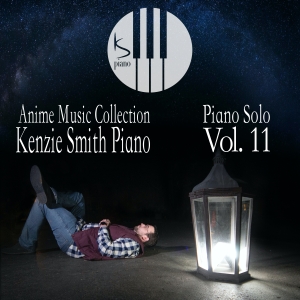 Listen to my music here